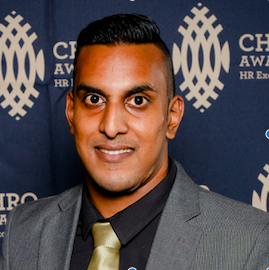 The announcement of his recognition came following an award ceremony by CHRO South Africa on 26 November 2020. CHRO South Africa connects HR Directors in order to share knowledge, exchange interests and open up opportunities to learn.

CHRO South Africa has over 200 HR Executives as members, and it was these members — as well as colleagues — who nominated Chetty for his award. After undergoing a panel interview process, Kyle ultimately walked away with the top recognition as Young CHRO of the Year.

Kyle (31) joined Autoboys in 2017 when the business was newly formed out of Grandmark International and had just 47 people working there. (Today, Autoboys employs over 500 people.) His first task when he joined was to survey employees to discover their views, and develop the company’s values.

“I had just a laptop at the time and we started everything from scratch. It was really about getting involved from the ground up, putting in long hours and implementing all the necessary systems,” says Chetty

Within three years, he helped take the business from having no B-BBEE rating to being rated at Level 1, signalling how transformation and community upliftment form part of the company’s core mission.

He’s also spearheaded a successful Yes4Youth programme within the company, as well as an unemployed youth initiative, that has employed and uplifted 80 previously disadvantaged learners — 42 of whom were disabled. Many of these learners have been absorbed into Autoboys or other companies.

He further introduced an R8.5 million annual training budget and has been instrumental in the implementation of payroll, company intranet, performance management, and time and attendance systems.

Kyle’s award was handed to him by Vodacom CHRO Matimba Mbungela, who last year won the HR and Technology award.

“I wouldn’t be here without my team – which is not just the HR team, but also all employees and senior leaders, throughout Autoboys, that we work with. This is something we’ve achieved together,” says Chetty.

“It means that my team and I have been recognised as adding value to the business and that all our hard work has paid off,” he adds.

Kyle started getting involved in the working world at a young age in his father’s logistics trucking company — work which involved early hours and long nights.

From there, he worked for the Foschini group. In 2008, he then moved to the US briefly where he started out as a cashier for Six Flags Great Adventure, and he ultimately went on to become its Retail Supervisor and Labour Manager. Upon returning to South Africa, he worked in HR roles for the likes of JD Group, Grandmark International, and Cape Union Mart, before joining the team at Autoboys.

Kyle has a B.Com Hons Human Resources from MANCOSA, and he completed his undergraduate degree at Regent Business School. He is also a certified Gallup Strength Coach.

On the way forward for Autoboys, Chetty sees great potential.

“Autoboys is still a relatively young business, but in the last three years it has grown by leaps and bounds. We’ve accomplished a lot during this time, but there’s still a lot we need to get in place. We’re looking more closely at how we can support the growth of the business more from a HR perspective as well as helping the business to expand its global footprint,” says Chetty.

“HR is always changing and we intend to keep ahead of the curve. One of my next goals is to make Autoboys an employer of choice in the next two years. I love working at Autoboys – it’s a company that has strong leadership and it’s an awesome place to be.”

On his advice for other HR professionals out there, Kyle says it comes down to a lot of hard work.